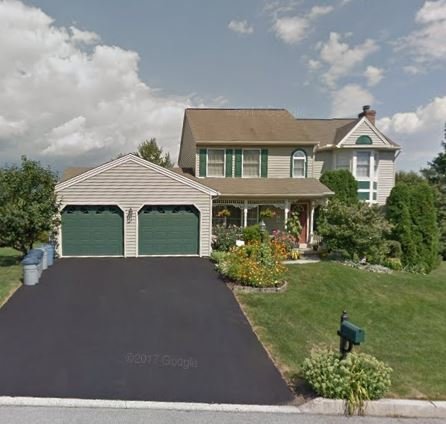 Uneven heating and cooling can be a year-round problem. This is when some parts of a house are hotter or cooler than others. It’s a common HVAC problem.

Even with the furnace on, the rooms on the top floor of a colonial home in Harrisburg PA were always too cold. And, in the summer the air conditioner never got the bedrooms cool enough.

It took a while to get to the root of the problem. In fact, the homeowner met with a few HVAC companies near them before calling UGI Heating, Cooling and Plumbing. Our comfort consultant, Joe Leinbach, quickly found out why this was happening.

The bad news was that it would be a big job to fix. The good news was that Joe and the UGI team helped turn it into an opportunity to make a major upgrade. And, we made sure the job was done thoroughly and correctly.

Problem: The second floor of a two-story colonial home in Harrisburg PA was too hot in the summer and too cold in the winter.The HVAC system was too large for the home. 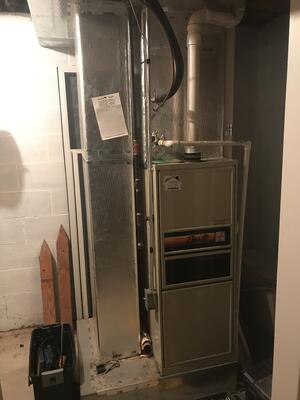 Joe Leinbach determined that the problem in this home was the furnace and air conditioner were too big for the house. This is what caused the upstairs rooms to never heat or cool properly.

It seems like a system that’s too big would do the job quicker. But, that’s not the case. Instead, when a system is too large it doesn’t stay on long enough to work.

To explain this, let’s start in the winter. When it’s cold, the homeowners set their thermostat to 68 degrees. When the house gets colder than that, the furnace kicks on. So far, so good.

In this case, however, the furnace was too powerful. It sent a blast of hot air through the house very quickly. That hot air had nowhere to go. Since the system was too powerful, it provided more heat than the home could use.

When this happens, the hot air begins backing up through the ducts and remains in the furnace. This causes the inner parts to get too hot. When that happens, the furnace then switches to blowing cool air. It does this to prevent the parts from getting damaged.

This process is called “rapid cycling.” It’s a common sign of an oversized system. And, as Joe explained to our homeowners, that’s exactly what was happening here.

In some rooms, it wasn’t a big deal. After all, the bottom floors heat up faster than the top ones. But, the heat doesn’t stay on long enough to actually treat the second floor. And, those rooms would actually get cooler. This happens when the cool air from the furnace makes its way through the vents.

Joe Leinbach also explained how, in the summer, the opposite would happen. A powerful blast of cold air dropped the temperature quickly. As a result, the thermostat would shut off the a/c. But, that would mean the unit only did half of its job.

An air conditioner does two things: Cool the temperature and remove moisture from the air. This helps keep the humidity low. But, to remove moisture it has to stay on for a while. When it shuts off too quickly, the air remains humid. This makes the home feel muggy.

Now that we figured this out, the next step was to fix the problem. But, this would be a big investment. The best solution was to replace both the furnace and air conditioner. Fortunately, we helped out homeowners make the most of the situation. 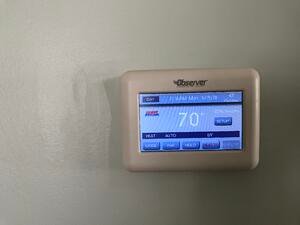 Better climate control with a high-efficiency furnace and a/c

During the estimate, Joe Leinbach worked closely with our homeowners to find the units that were right for them. Of course, the first step was making sure they were the right size for their home. Without getting too technical, Todd did so by measuring the square footage and examining the layout. Then, he calculated how much power, measured in tonnage, the space needed.

Once whee were confident with the measurements, it was time to work out what models would fit what our customers wanted. In this case, they wanted something more efficient than their old systems.

This meant not only heating and cooling evenly. They also wanted HVAC systems that used less energy than their old ones. We found just the units for them.

For heat, our homeowners went with a Heil two-stage furnace with a variable-speed blower fan. A two-stage furnace can operate with its valve closed, partially open or fully open. This is different from their old one, which could only be open or closed.

The two-stage furnace, then, can operate at lower power. This prevents the rapid cycling problem, where too much heat at once causes the system to blow cool air.

Next, we paired it with a Heil variable-speed air conditioner. Like the furnace, this unit would work at different levels to prevent it from pushing too hard at once.

What these systems also have in common is that they’re high efficiency. This means they use less energy than other systems to provide the same heating or cooling. And, less energy means spending less money on monthly utility bills.

When it comes to air conditioners, anything with a Seasonal Energy Efficiency Ratio, or SEER, rating of more than 14.5 to be considered high-efficiency. By contrast, those old window air conditioners that cause electric bills to skyrocket, have SEER ratings around 10. The unit our homeowners chose had a 19 SEER rating.

Similarly, the new furnace had an AFUE rating of 95.6 percent. AFUE stands for “Annual Fuel Utilization Efficiency.” It measures how much energy is actually lost in exhaust rather used for heat.

Older furnaces, like the one our homeowner had, can have AFUE rates as low as 75 percent. In those cases, a quarter of the energy they use is wasted. The new one only loses 4.4.percent.

Our homeowners made a big HVAC investment with a new furnace and air conditioner. But, they’ll make that money back over time. And, they’ll do so in more ways than one.

First off, Joe helped our homeowners get an instant rebate for their new system. This came from PPL Energy, their local electric provider.

PPL,like many other utility companies today, offers cash incentives for people to install high-efficiency heaters and a/c’s in their home. In this case, we helped our homeowners get an $800 rebate based on the units they chose.

And, that’s just the up-front savings. From here on out, this colonial home will have better, even heating and cooling. And, it will get it for less money than it used to cost.

That’s because the new system is the right size for the house. Now, the furnace and a/c won’t turn off and on again all the time. Cycling on takes more energy than just continually running.

The new system doesn't have to work as hard to maintain the temperature once it’s reached. And, thanks to their high-efficiency ratings, they’ll use even less energy just to do that.

Are you considering upgrading your HVAC system? Or, do you think the one you have may be oversized and not working properly? Contact us for a furnace inspection or consultation and we’ll make sure you have the right system for your home and budget.