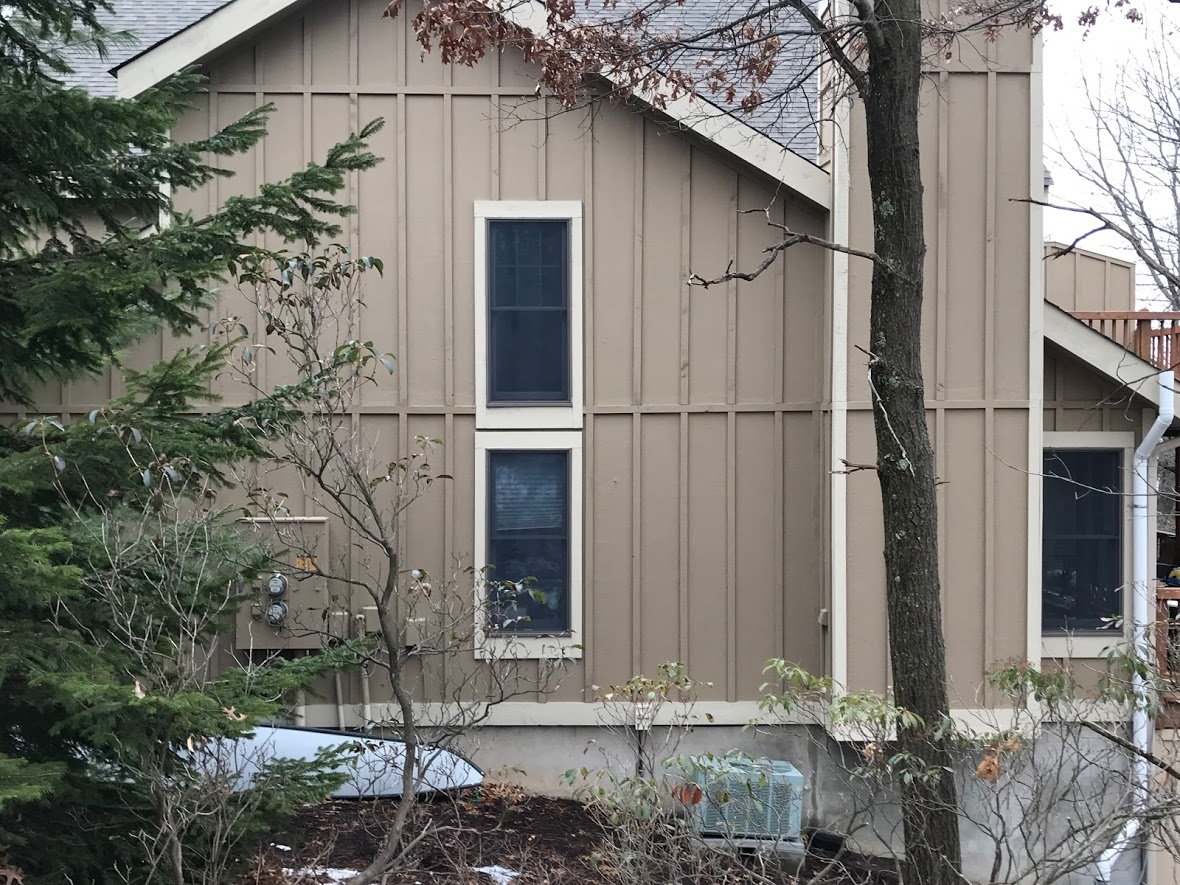 Our homeowners in Tannersville, PA loved their rustic A-frame home. It’s a design that’s common out in the Poconos. You can always spot them by their steep, sloped roofs.

However, that iconic design also makes heating and cooling a challenge. That’s because hot air naturally rises. And, in this case, the hot air created by the home’s baseboard heat always rose to the top of the high ceilings. The homeowners would have to crank up the heat to get the living space to a comfortable temperature. That, of course, meant larger energy bills.

And, the existing system used just one thermostat. As a result, other rooms ended up getting much hotter than our homeowners wanted them.

As a result, they were often opening windows in the upstairs bedrooms at night, even in the winter. Even though it was cold outside, these rooms were too hot while others were still too cold.

Meanwhile, letting in all that cold air cost them even more money. Now, the heater would stay on even longer to compensate for those lower temperature in the home.

Our homeowners were finally ready to make a change. After researching HVAC companies in the Poconos and Lehigh Valley, they chose UGI Heating, Cooling & Plumbing to help them improve their situation. They felt confident after reading our many positive customer reviews.

UGI HVAC's Jim Baab designed a customized ductless heat system to supplement the home's existing system. The new system woudl warm the areas that needed it. But, it wouldn’t overheat other spots in the home. And, this solutiion was much more affordable than overhauling the entire HVAC system. 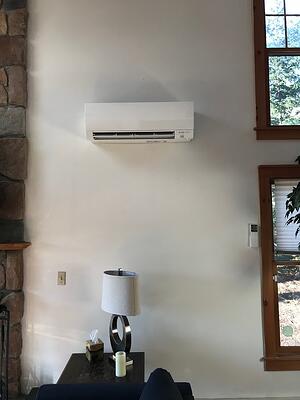 HOW A DUCTLESS HEAT SYSTEM WORKS

Jim Baab explained to our homeowners how a ductless heat system uses tubing and panels instead of ductwork and vents to heat an area. That allows hvac companies to place the panels exactly where they are needed without having to build and install new ductwork. And, each panel works independently. This way, homeowners can customize the climate control in different parts of their home.

The process starts outside with a heat pump. Using a small amount of electricity, it generates heat by drawing warmth from outside and amplifying it. Then, that heat travels into the house through small, plastic tubing.

The tubing is small — less than three inches in diameter — and bends. This way, our installers can place it virtually anywhere in the home. All they have to do is run the tubing and electrical wires through the walls.

On the other end are the indoor ductless panels. These are the devices that distribute the air. We place them high up on the wall in the rooms where they’re needed.

From there, the tubing connects to the back of the panel, so you don’t see it. And, the panels are whisper-quiet. Even when they’re on full blast, you won’t hear anything unless you’re right under them and listening carefully.

What makes this system so appealing is that we can customize it easily. That’s the big difference when you don’t need new ductwork. Designing and building new ductwork is costly, takes a long time to install, and can really take away from the home's living space and aesthetic appeal.

Instead, ductless bypasses all that. Our installers can often put an entire system in a home in less than a day. They don’t need to build anything, tear down any walls or take up any extra room in the house.

That’s because the tubing fits neatly behind the walls. Meanwhile, the panels sit high on a wall, out of the way. There are also floor models, and recessed ceiling models available. A ductless min-split system is just as powerful as a standard central HVAC system. But the critical difference here is that out homeowners can customize it. 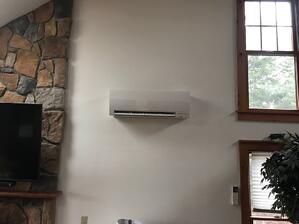 Uneven heating occurs when some rooms in a home are warmer than the others when the heat is working. It happens because each room needs a different treatment.

Unlike a centralized system, the ductless heating system that Jim designed can accommodate this need. Every panel has its own thermostat. This setup creates zoned hvac. Each panel is responsible for a different room, or zone, in the house.

When one zone reaches the temperature the panel is set to, that panel shuts off. Meanwhile, another may stay on longer if that zone needs more treatment.

That's different from the centralized baseboard heating in this A-frame house. Here, the rooms with high ceiling were always chilly. The warm air kept rising toward the high ceilings, away from the living space.

But, once the room with the thermostat reaches the temperature you want, the system shut off. That left the larger rooms chilly because they still needed more heat.

Now, our homeowners use their panels to eliminate the uneven heat. They set their baseboard heat thermostat to the temp they actually want. And, they do the same with the ductless panels.

When the home's existing central HVAC system comes up short in the A-frame rooms, the panels pick up the slack. This way, they are adequately warmed without overdoing it in the smaller areas.

And, the new system is not only convenient. It also saves our homeowners money. 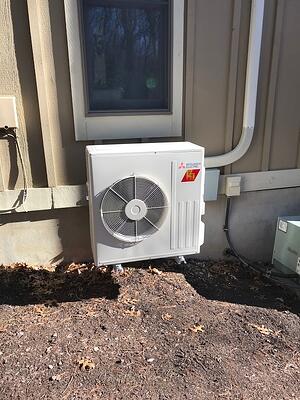 Ductless heat uses less energy than other HVAC solutions that are just as powerful. As a result, homeowners with ductless systems see significant savings on their energy bills. That’s because the less energy they use, the less they pay for.

Mini-split systems like the ones we installed are Energy Star-certified. They meet government standards showing that they use less energy than comparable systems. And, they achieve this in many ways.

First, there’s the outdoor heat pump. A traditional hvac system will create heat by burning oil or gas, or use electricity to heat up coils. Not so with this setup.

Instead, a heat pump uses a heat transfer process. In the winter, it pulls in what little warmth there is outside. Then, using a closed system, it magnifies that heat and sends it inside the home.

Rather than use electricity to create the heat, it just uses a little bit of energy to run the machine. That’s a big difference when it comes to energy usage and electric bills.

Next, the entire system is much more efficient. Unlike ductwork, the tubing is sealed tight. No heat escapes on the way to the panels as it would if it were being pumped through traditional ductwork.

Then, the zoned aspect helps keeps costs down. That’s because the system overall runs less than if it were working from one thermostat. When some panels turn off before others, that’s less energy usage overall.

Finally, the mini-split cuts down on how often our homeowners use their more expensive baseboard heating system. Now, the mini-split system on its own is enough for the late fall and early spring. These are times our homeowners usually began using their central system. Instead, they can use the more energy-efficient panels on their own until it gets much colder.

Now, our homeowners have a beautiful A-frame house that feels as good as it looks in the winter. And they're saving a bundle on their winter utility bills!

Are you looking for a more efficient and cost-effective option for heating and cooling your home? Contact us, and we'll design the perfect solution for you!